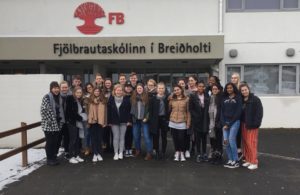 We interviewed some of the Icelandic, English and Belgian students and asked them a couple of questions about their experience of the exchange student program.

16-year old Icelandic girl. Lives in Reykjavic (Iceland). She went to Belgium for the Erasmus+ project. she was staying with Clémence De Snoeck, a 17-years old Belgian girl who lives in Zulte. Zulte is only 5 minutes away from Heilig-Hart College (Waregem).

So the first question, what was different in Belgium?

I think that the school was the most different thing about Belgium, because it was so strict. They have more rules then in Iceland. Also the people in the school are different from ours because they all so simular. In Iceland you see a lot off different personalities and styles. In Belgium, most off the people look the same.

What do you think was missing in Belgium?

Definitely the Icelandic water. Because it’s just more natural then the one they sell in Belgium.

Did you learn anything more about apps?

Yes, I did. First, that people want schoolapps more then I thougt. That they even want a schoolapp more then a datingapp.

Everything, I really liked the trips to the cities. In Belgium you have a lot of different cities which was fun to walk around and see the culture.

Why would you go back?

I would go back because it’s so different then at home and it’s an interesting country.

18- year old girl from Iceland. She also went to Belgium for the Erasmus+ project. Ísól was staying with Stephanie, a 17 year old living in Waregem. Stephanie attends Heilig Hart Collage in Waregem. We asked her a couple of questions:

What was different in Belgium?

The school, the school life, there was not as much freedom as in Iceland. It was cold in Belgium but different kind of cold than in Iceland. Also they have a lot of chocolate there!

What do you think was missing in Belgium?

We could’ve worked faster if we had gotten the wifi to use our own computers.

Did you learn anything more about apps?

Yes, I learned more about apps, both google apps and Microsoft apps.

Getting the opportunity to participate in this exchange student project.

Would you go back? Why?

Yes, because it was fun.

What was different in England?

It was stricter in school. It wasn’t that different from Iceland.

England was missing diversity since everyone in school wore uniforms whereas in Iceland everyone is unique and there are not that many rules so you are free to be who you are.

Did you learn anything new, for example technology?

Yes, I learnt programming such as using the language python. My Englihs became more fluent since I learnt new vocabulary and feel much more confident speaking the language.

I enjoyed spending time with the English students because I like getting to know people from other countries and their culture and lifestyle.

Yes because I like to travel and get to know the British population more but I would not like to live there.

What was different in England?

I found the school system different because there were more rules and regulations.

I thought that freedom was missing since in England you have lots of curfews about where you have to be at a specific time.

Did you learn anything new about technology?

Yes I learnt a lot more such as how to programme a robot, which were the tanks we used in school.

I really enjoyed when we went downtown!

Yes because I really liked everything about England because it is very beautiful.