On the 19th of January we visited the beautiful city of San Sebastian. We left from Pamplona at quarter past eight. On the one hour bus driving, we listened to music and were singing along to our favorite songs. It was a great way to chat with some people that we haven’t talked to before. When we arrived there, they divided us in 3 different groups, so the Basque students could start the day with an interesting tour through the city.

The first thing we visited was an old cozy restaurant not far away of the beach, named Gaztelubide. The reason why we visited this restaurant is because it has his own association of musicians that are responsible for the opening and closing of the festivities of Tamborrada. 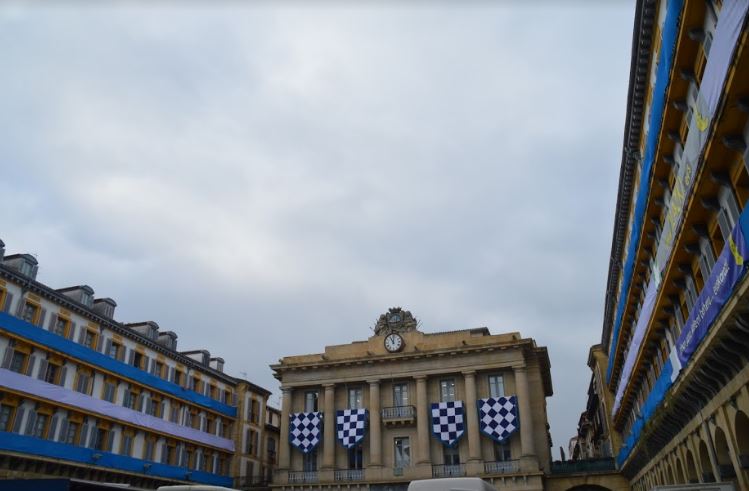 Picture from the Constitution Square in San Sebastian / Donostia

The building contains two floors. That’s necessary because the association contains more than hundred members, so otherwise it would be very hard to gather with everybody on the same time. They also showed us the typical costumes that they wear during the festivities, a blue vest with a white trousers and a bearskin, sort of a tall black hat. It reminded us a bit of English guards during the 17th century. Also a tradition of the restaurant is that women can’t enter the place, unless they are invited.

Then we continued on our journey through the streets of San Sebastian. We thought they were very cozy and reminded us a bit of Italy. There were a lot of beautiful buildings, but the one we liked to most was the Basilica of Saint Mary of Coro. This is a wonderful church of the 18th century. Unfortunately we couldn’t go inside because we had to pay for it. We passed along the Constitution Square were the Tamborrada starts (20th January). On top of the hill there was a statue of Jesus Christ, as if he’s guarding the city. It’s a very beautiful view. At the end of the tour, we walked over the beach back to our meeting point.

We visited the city a day before the festival ‘Tamborrada’, a drumfestival that is always held on the 20th of January in San Sebastian. The festival starts at twelve o’clock in the evening and it continues on for 24 hours. The people dress up like cooks and soldiers and start playing music, using spoons and other stuff normally used in the kitchen. The reason they do this is because in the 19th century, the french soldiers marched through the city playing drums. So the festival started actually just trying to make fun of the French soldiers. Now it’s a wonderful tradition that attracts thousands of people every year. So therefore it’s no surprise that there were a lot of people preparing the festival on the streets.