Waregem and Sykkylven to Pamplona 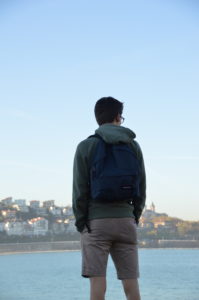 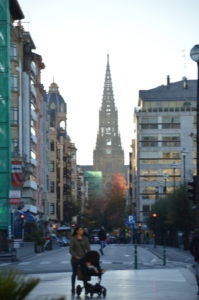 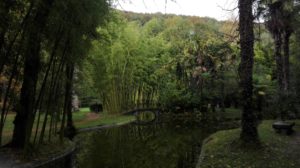 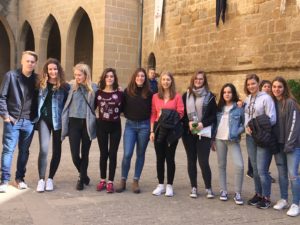 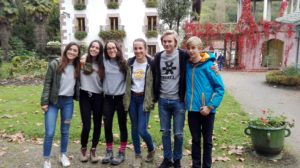 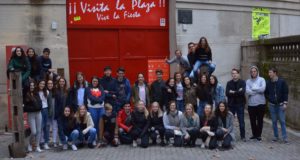 We had to be at school at 9am. We started with the presentations of the schools. Then we had a short introduction to the Basque language. Later on we started with the project. We have to think and argue about the digitalisation of subjects in schools. We did this by first telling each other how we do it in our schools and then we compared them. We had to give our opinion about the subject and then we came to the conclusion that we should digitalise the languages, but we shouldn’t digitalise subjects like maths and science. After school was done, we had a little trip in the centre of Pamplona.

The tour yesterday was a good experience for everyone. The guide told us the whole story about the beautiful city Donosti. It was a bit long, but she showed us the most beautiful places. She explained us the history, this was told with a lot of passion, what made it very nice to listen. We’ve learned things about places we didn’t know that exist. There are “cooking clubs” for men. Women can’t enter. The men bring their own food and they cook and eat together, while their wives are stuck with the children. We think this is very weird. We don’t have this kind of things in our country.

During our Erasmus + exchange program, we had to partake in some project work about EKI. EKI is a project that is digitalizing the core subjects of the school system. It uses Google Drive as its main platform.

Our group of 48 students was split up into 10 separate groups. Each group, which contained 4 – 5 people, was assigned a specific task around the EKI program. The main task was to optimise the workings of the EKI program. During the project pupils needed to work together to find the best way for teaching the students, using both paper and technology.

The first two groups had to make a reflection about digital support, paper or both combined. Their purpose was to find the best option for teaching. Groups 3 and 4 had to discuss the pros and cons of digitalizing the school system. Was it a good thing or would it lead to a degradation of learning experience? The middle groups had to find the best methodology for receiving classes. Which method would deliver the best results? Group 7 and 8 had to look for the best learning system. They had to focus primarily on what the students had to do. Meanwhile the last two groups had to find the holes in their respective educational systems.

All communication went in English. Both Norwegians, Belgians and Basques could speak English very well. We had a great time learning about each other and our respective schools. There was also a lot of communication between the different groups. We could ask other groups questions and there was some interaction with the other students.

At the end of the day we finished our presentations and we were happy we had the chance to work together with so many different cultures. We are definitely looking forward to the rest of the project in Pamplona and the period in March, when the Basque students come to Norway or Belgium for the second part of the exchange program.

In the beginning it is a little bit scary because you don’t know the people and you don’t know how the parents will react when you will
live with them. After one hour it already felt as home, they made us feel very comfortable. the people from here show hospitality.
One of the Belgian students said: ”The parents and the student do the best the can to talk to me, at the start it was a bit difficult
but now everything is going perfect.” An other person said : “I have a really good host family they are really taking care of me, it almost feels like a second home”
In the beginning the brothers and sisters didn’t talk much, but now two days later we talk about everything, even the love life of each
other and we wish them good luck with the exams they have.
we don’t really have negative points the only struggle is that they still speak a lot of Spanish.

For us Belgian and Norwegian people it was also a bit strange to have lunch and dinner and such a late hours. We are used to
it to eat around 12 and 19pm. But we will get used to it,

At first it was a little bit strange because we didn’t know each other. But now, we are little by little getting to know each other
and we feel that our conversations are more fluent.
One of the Spanish students said: “I didn’t know how to speak with her for been both of us comfortable speaking at home” and another
said: “It was very uncomfortable because we didn’t know each other”. “Now we feel more comfortable hanging out together.”
We think that doing this experience learns you different things, how to be with people that you don’t know, how make new friends… It’s
a really good experience for all of us. The parents said: “he is a bit shy, but he has a nice behaviour” “He is very friendly” “It’s interesting to have a exchange student because our kids are having new experiences and it’s also interesting for us” “It’s
a little bit hard because we don’t know english so they have to translate everything to us, but we are having a good time”

In this text, we will give a description of the atmosphere during the exchange project with San Fermin Ikastola, a school in Pamplona.

Saturday morning the Spanish students took their exchange partners from Norway on a Pamplona tour around the city. The Belgians arrived at around 5 o’clock, and then another tour started. Now that we were all together, Belgians, Norwegians and Spanish students, we discovered different locations around the city. It was a long walk, but we really enjoyed it, the perfect way to meet each other.
After the walk most of the students from Spain took their partners to have pizza for dinner at two different shops: ‘El Carrito de mercaderes’ and ‘Italian Corner’. The pizzas at ‘Carrito de Mercaderes’ weren’t so good, but we liked the ones at ‘Italian Corner’. Having dinner together creates a relationship.
After dinner, we went to different bars and we had Spanish tapas. With all of the students from different countries together, the atmosphere was great in a typical Spanish environment. All of us liked it very much and we really enjoyed creating an international friendship.

On Sunday, the host students did an activity with their exchange students. Some people visited the Olite Castle, a medieval castle in a small village, near to Pamplona. Others went to the Mendukilo caves, beautiful caves in the mountains around Lekunberri, where you can see the influence of the pure nature during thousands of years. This created a common feeling of respect for nature.
In the afternoon, we went to the center for another walk. We went to the City Walls (Ciudadela), because there’s a nice park there. All of us loved the park and, as a consequence, we took some beautiful photographs. We had so much fun together and the pictures will keep that day alive in our memories.
For dinner, we went to a tapas restaurant called ‘100 montaditos’. It was ‘Euromania’ day, so we had a great meal for a cheap prize. The foreign students told us that the montaditos tasted really good. At the end of the day we were all happy, but exhausted.

On Wednesday, we went to San Sebastian, Donostia in Basque. After a guided tour around the city, we had free time to do whatever we wanted. Thanks to the beautiful weather, it felt like summer: 26 degrees and a shining sun. Some of us went shopping, for souvenirs, to remember the atmosphere of the day forever. Some people went up to the Urgull Hill, to have an almost 360-degrees overview of the city next to the beach. The climb was a little tough under the burning sun, but the view over the city was overwhelming. A flabbergasting place to have lunch with our new foreign friends.
In the afternoon, almost everyone went to the beach, to enjoy the sun and go swimming in the refreshing water. A very important part of a holiday at the beach is of course an ice cream, also in san Sebastian, so the group of participants to the exchange project supported the local ice cream economy by buying a very palatable dessert. A perfect way to end a perfect day.

This was a small summary of the activities and the atmosphere during the free time of this exchange project with San Fermin Ikastola. We explored the city and also a small part of the Basque culture. I can conclude that the project was a big success, concerning the international relations between the participants.