Tuesday morning, the students of Pamplona, Waregem and Sykkylven gathered in the ancient part of Pamplona to make a tour through the old city. The first thing we visited was the City hall. It really was a privilege for us to see the building from the inside. It was a new experience for us foreigners, and for the students of Pamplona as well. When we arrived, a woman was waiting for us to give us a guided tour through the magnificent city hall. 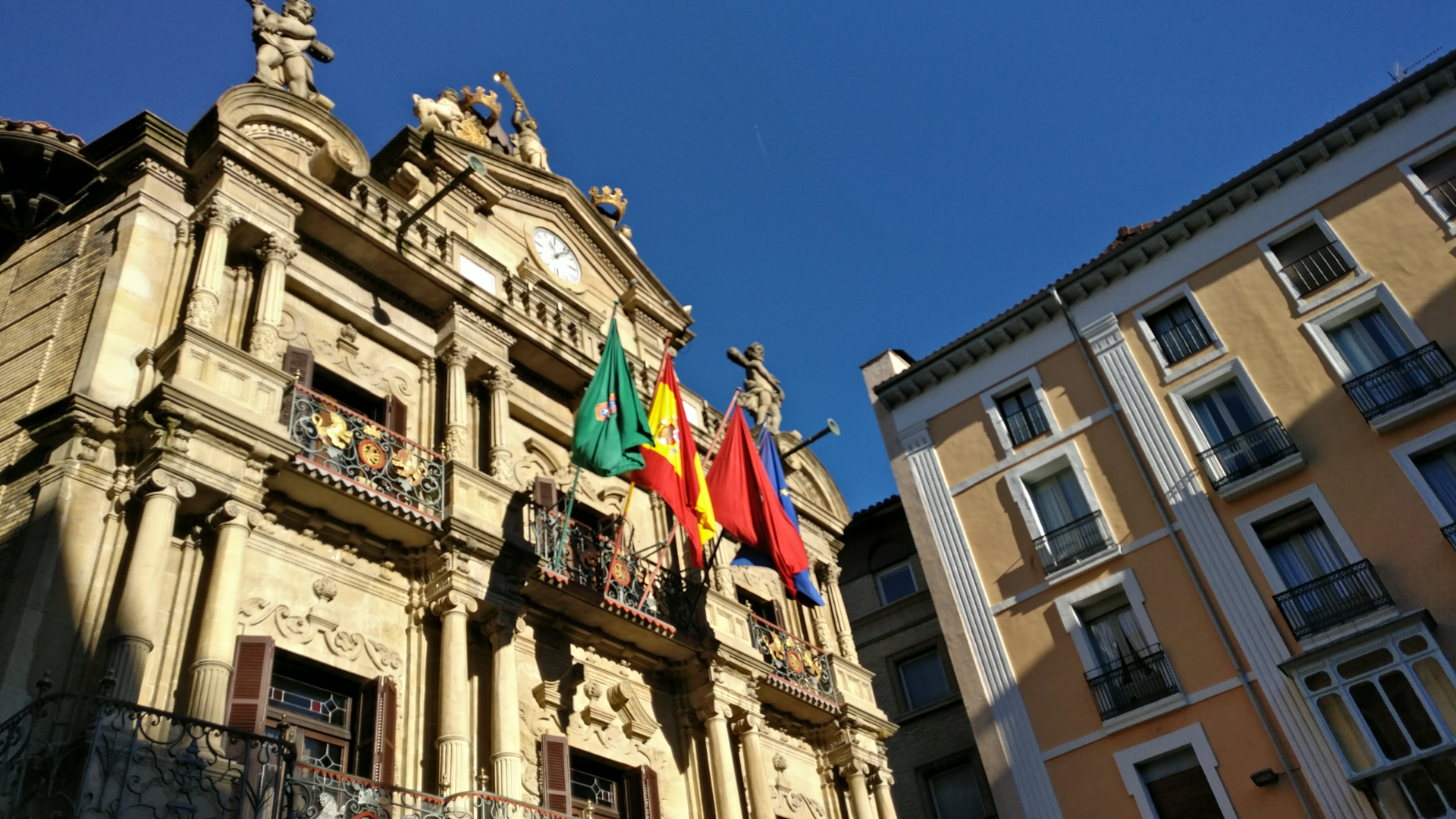 First, she introduced us to the façade, and told us about the sculptures and the architect. There are seven sculptures, five on the top of the building and two on the each side. The two on the top, one left and one right, are statues of Hercules with a mace. The three others are lions and a man standing on the top of the building holding a trumpet. The city hall has three floors with pillars and balconies.

Group 3 in front of the city hall in Pamplona, Navarra.

After listening to her talking about the facade, we entered the building and ended up in a big reception room. On one of the walls there were two paintings of  Julián Gayarre, an opera singer and Pablo Sarasate, a violinist. On another wall, we saw queen Mariá Isabella II and her husband. In this room, the guide explained that, until 1423, Pamplona was divided into three separated cities: Navarrería, San Cernin and San Nicolás. The name Pamplona did not exist until Carlos the Third of Navarra decided to join the three small cities to form one single city with a single council. The guide told us about the walls that surrounded the cities and that after Carlos the Third of Navarra, they were destroyed. We learned that the City Hall was built to represent the union and peace between the three cities. The City Hall has not moved from its location since it was built, but the appearance has renovated and redecorated . The original City Hall building was demolished in 1753. After visiting another couple of rooms, we had a good overview of the history of Pamplona. The statues and paintings that are exposed in the city hall were very impressive as well. Behind every piece of art, there is an intriguing story. 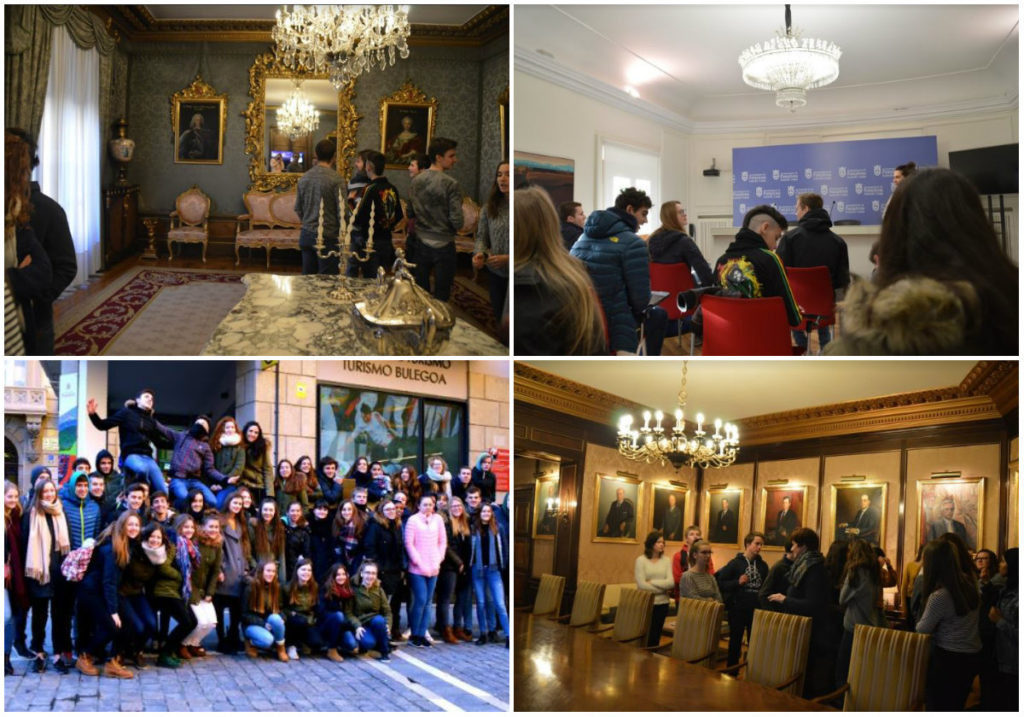 An impression of one of the pupils:

The City hall of Pamplona was very nice and the architecture was unique. The first impression we got when we saw the building on the outside, was that it was nicely decorated and detailed. The City hall was both beautiful and something we don’t have in Sykkylven. People from Sykkylven and Waregem were fascinated and amazed by the building. It was an honour to visit the architectural masterpiece and hear about a part of the history of Pamplona.

We can surely conclude that the visit to the City hall was a great start of a wonderful day.

You can inform yourselves more about it here www.pamplona.es. 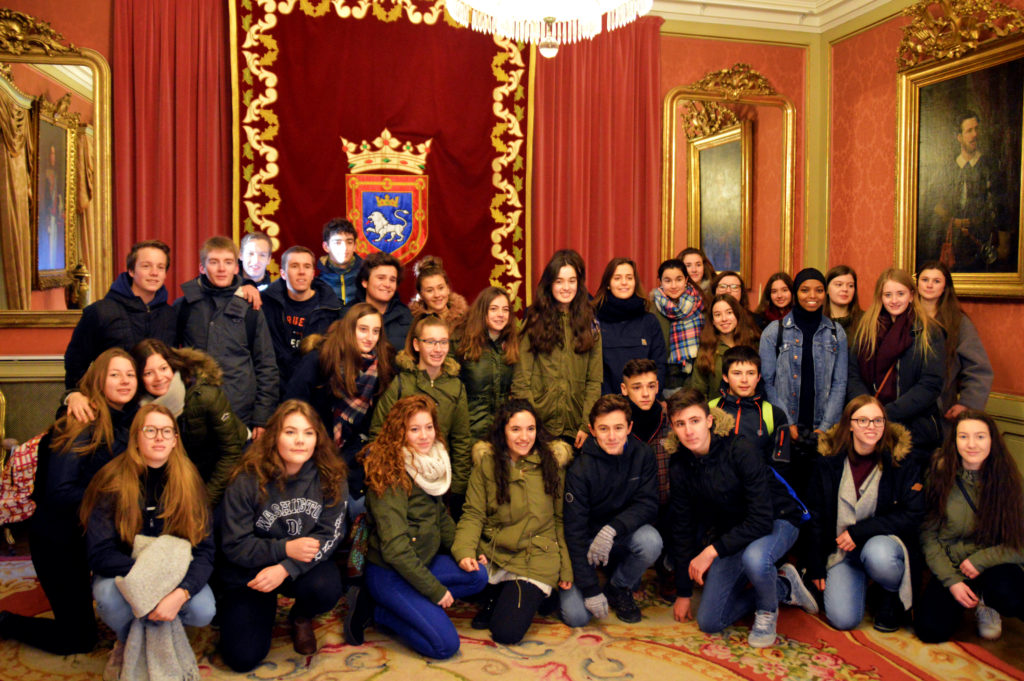 After having lunch we went to a guided visit the Navarra palace, made in 1840 and we received a guided visit. First we visited the president’s office, where Navarra’s president used to do his daily chores until 2004. Then, we went to a room where the government meets and takes important decisions. In the same room there were some paintings of different Spanish kings, including the painting of Ferdinand VII by Francisco de Goya, the Spanish painter. After this, the guide showed us the library room, that were now turned into a coffee room for the politicians. The walls were decorated with the paintings of the last presidents. We also visited  the king’s room, This room looks a bit similar like Versailles because of it’s golden decorations and its large mirrors. 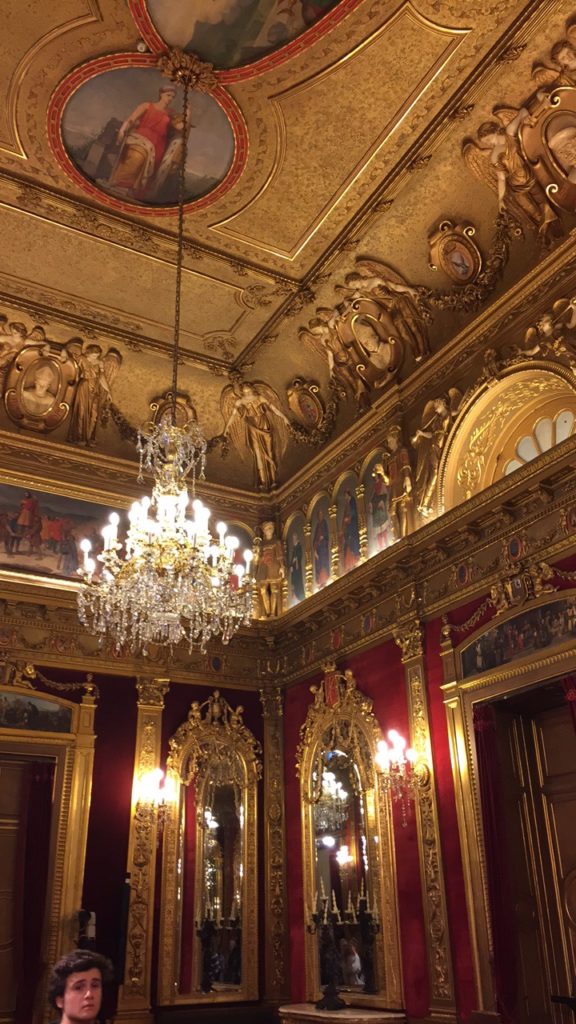 The room contained two thrones, and the floor was very beautiful decorated. In the roof there were statues of all the different Navarra kings, and the coat of arms in the different regions of Navarra. The last room we visited was the little chapel decorated with a lot of gold and a bit of silver. This was the end of the tour, and on our way out everyone got a informative paper and a Navarre pin.

We liked the palace a lot, because it was extensively decorated with gold and silver, and there were lots of very beautiful canvas. The room I liked most was the king’s one, because of its statues in the roof and the puzzled floor. The chain over the thrones is also one of Navarre’s most iconic objects, because it is represented in the coat of arms, together with a green emerald, symbol of the defeated moors in the Navas de Tolosa battle. We had a great time and we learned a lot.