The 15th of January is the day the Belgian students had a big delay with the airplane. The plane was not able to land in Pamplona so they had to fly to Bilbao. In Bilbao they took the bus to Pamplona. It was a two hour busride. Consequently, the students arrived a couple of hours later than planned. When they finally got in Pamplona they went to their host family. After meeting the host families, they drove towards an iceskating arena. They seemed to have a lot of fun. After the iceskating they went to the mall and had dinner over there. Afterwards they went back home and got to bed. It was a very long and arduous day, but most of the students are very glad to be part of this exchange program.

We started our journey to Pamplona outside our school in Sykkylven. A minibus picked us all up to drive us to the airport. The trip included a ferry taking us across the fjord to Aalesund. After that we drove for 30 minutes to the airport. before we went on our plane we played cards. Our flight left at 17:00 pm and landed in Amsterdam ca 19:00 pm.

Since we landed in Amsterdam just an hour before the next flight was leaving, we didn’t have much time to anything. We went straight to the next gate and waited for the message to board the plane. Our plane was leaving Amsterdam at 20:40 and it landed in bilbao at 22:30, before we took the plane we went to a cafè there people bought coffee and some food.

When we landed in Bilbao we went inside to get our luggage and meet Xavier. Xavier is a teacher that works at the school where our exchange partners attend school. Xavier brought us outside and over to the buss. The trip took about 2 hours. at the bus we were very tired so most of us tried to get some sleep, while the ones not sleeping was sitting and talking about how we were going to act when we first met our exchange students. We were very nervous. We arrived in the city center, at a hotel, and met our new hosts for the week. After that they took us by car to our homes and we got some supper before going to sleep.

The day after the Norwegian students joined the Belgians and the Spaniards. The day started with some introductions. Three Basque students, for example, performed a typical Basque folk dance called “aurresku”. A very original alternative for a normal introduction. The Norwegian made a little movie to present their school. For the Belgian students, a few powerpoints was the most clear way to tell their audience something more about their country and their home city Waregem.

Afterwards, some Basque students led us around the most important parts of their school. During the tour, the foreign students particularly noticed it is a big school, with a lot of different buildings, with different floors. It has lots of facilities for sports as well. The buildings are very close to each other so, you can go by foot from the one to the other.

It is remarkable that they have windows in every classroom, so you can look outside and see who is running down the corridors. The windows are something special for Belgian and Norwegian people, because they normally don’t have windows in the sides of the classes. They have windows at the back of the room, but they are facing at the front. It means, the blackboard is in the front. In Belgium have the same chairs as in Pamplona, but in Norway, they have chairs with wheels and soft back supports. Also the desks are bigger in Norway, and the lockers are used to keep all their books and binders.

Conclusion: most of the school is very similar to those in Norway and in Belgium. Due to the differences, it was very interesting for the Belgians and the Norwegians to have seen their school.

After visiting the Town Hall in the morning, the teachers gave us free time. Once the gymkhana’s tasks completed and, therefore, after getting tired from learning to get around the town, some of us went to Café Iruña to taste their famous “chocolate con churros”; it is a very typical winter “dessert” in Navarre (a very thick chocolate drink accompanied by a fried batter dusted with quite a lot of sugar), which helps us  warm up in such cold days. This seemed to be very delicious.

That place, the Café Iruña, was one of the favourites of Ernest Hemingway, who was a very important American writer and journalist. He wrote a book called The Sun Also Rises (Fiesta) about the festival of Pamplona, and thanks to it, the “San Fermines” are one of the most famous events in the world. Due to this about a million people visit our town every year from 6th to 14th July.

When the lunch time arrived, some went to eat hamburgers in Burger King (despite it isn’t a very typical thing!), others to the bar “Jesus Mari” (there they make some of the best snacks of Pamplona) and a third group to “La Tasca de Don Jose”. Later, we continued visiting the old part of the city, from the “Plaza del Castillo” until the “Media Luna”; the sun was shining, but it was not warm. Actually, it was very cold because of the freezing wind.

After touring the Palace of Navarre, Belgian students and some Norwegians went to have something in a bar in the outskirts. The other ones went shopping to places such as Zara, Sephora, Pull&Bear and Bershka. A poor boy called Beñat had a traumatic experience, as he was terribly forced to enter a shop called “Women’s secret”, were female lingerie is sold. Fortunately, the girls behaved themselves and they didn’t make him try on anything. Thank you, girls!

When we finished, some of us (about 20 people) suddenly appeared in a Basque student’s apartment, wishing for some hot food. Though the parents were initially surprised, we bought some pizza. The local students had to help Norwegians to control themselves, as they wanted to buy tons of food because according to them, “ Everything was very cheap!!!”. While the pizzas were in the oven, the brave ones among us played to a strange game (XBox), which consisted in playing volleyball using no ball and ping-pong without rackets. It was great fun! 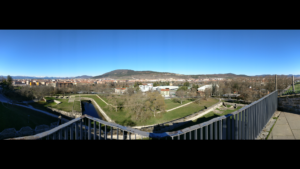 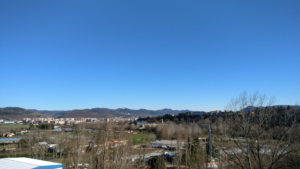 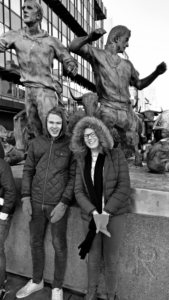 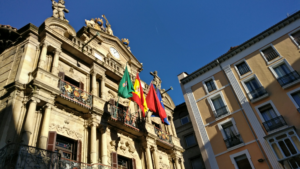 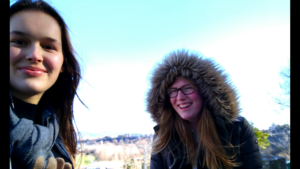 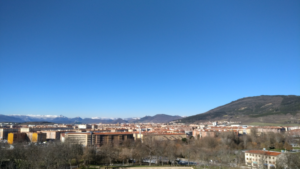 The Damborrada is a festival that takes place every 20th of January in Donostia/San Sebastian. It starts at 00:00 in the “Plaza de la Constitución” and it finishes the next day at 00:00, it lasts 24 hours. At that time, different societies start to play drums around the city dressed up as cooks and some of them as soldiers. During the whole festival, there isn’t one second of silence in Donostia, everything is synchronized that there is always a group playing music somewhere in Donostia.

On this day, we also celebrate the Damborrada in San Fermin Ikastola. Children from the 4th of primary school make their own costumes of cooks with cardboards, and also the drums, using tomato cans. Today we had the chance to admire this representation at the children’s playground. Even if it wasn’t the Damborrada from Donostia, it was a very nice way to show a small part of the festival and also a part of the basque culture.

Here is a short fragment of the Damborrada at San Fermin Ikastola: